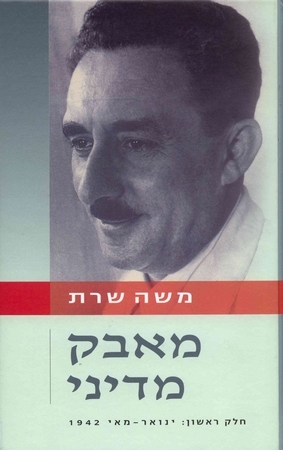 An Anthology of Speeches and Documents

Assembled and annotated by Shifra Kolat

Volume 1, Part 1 (published 2009) contains 156 documents: his speeches, memoranda and letters dating from January 1942 to May 1942. They vividly portray the stressful issues - both external and internal - that the Yishuv faced during that tumultuous period: the outcome of WWII had not yet been decided; the danger of a German invasion hanged as a threat over Palestine; the Yishuv was profoundly indignant in face of the British Government's inhuman attitude towards the handful of Jewish refugees who succeeded to escape in dilapidated boats from Nazi occupied Romania - a heroic epic that culminated in the tragic sinking of the refugee ship Struma in the Black Sea after it had been refused entry Into Palestine. At the same time the Yishuv cooperated whole-heartedly with in its war against Hitler and tens of thousands of its men and women voluntarily enlisted to serve in its military forces.

Throughout the period covered in both books Moshe Sharett played a pivotal role in the complicated and delicate relations between the Yishuv and the British Government of Palestine. His legacy from that era is illuminating and intellectually challenging to this day.