My Struggle for Peace 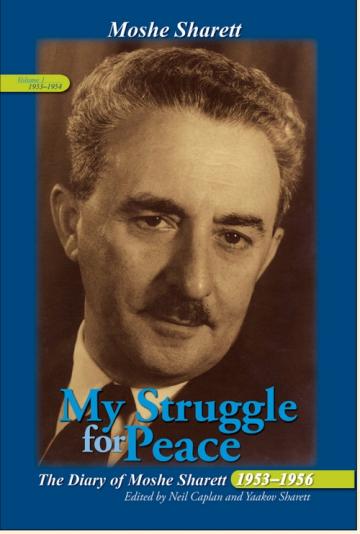 כותר My Struggle for Peace

Moshe Sharett: My Struggle for Peace

Moshe Sharett was a compulsive writer. He enjoyed the very act of writing, the flavour of the words and the quest for precision of expression.... [T]his is by no means a diary kept at leisure. Most of it was written under the extremely heavy pressure of work and great mental strain, very often in the middle of the night when he was on the verge of physical exhaustion.... Standing out above all [the Diary’s revelations] is the moral force which dominated Sharett’s personality.... This extraordinary diary, besides being a unique human document, is a treasure trove for the student of ’s contemporary history and invaluable for the understanding of one its crucial periods.

The most important thing Sharett contributed to the state is the personal diary he wrote during his tenure as prime minister. It is difficult to overstate the importance of those eight volumes to the study of the 1950s and to the understanding of Israeli history as a whole. This is a debt that also owes to his son Yaakov, who saw to the publication of his father's diary [in Hebrew, in 1978].

In 1978, Yaakov Sharett edited and published in its entirety the detailed and highly-revealing diary which his father Moshe Sharett had kept during his last years in government office and immediately after his forced resignation. The eight-volume Hebrew edition (covering 1953-1957), long out of print but now digitized and available here, has become a “must” for all serious scholars of Israel’s foreign and defense policy-making, and of the internal workings of the dominant Israel Labor Party in the turbulent period climaxed by the Suez/Sinai war of October 1956.

In response to numerous queries over the years, the Moshe Sharett Heritage Society has now completed the work of having these diaries translated, edited and prepared for the English-speaking reader by Dr. Neil Caplan, Canadian scholar specializing in the diplomatic history of the period, in collaboration with Yaakov Sharett, Moshe’s son and a former diplomat and journalist. The editors have recently signed an agreement to publish a new English edition with Indiana University Press.

The diary is a remarkable political document, providing intimate insights, both flattering and critical, into leading local politicians (including Ben-Gurion, Moshe Dayan, Golda Meir, Shimon Peres, Menachem Begin and Abba Eban) and world statesmen (including John Foster Dulles, Jawaharlal Nehru, and U Nu). They offer first-hand revelations of the complex workings of the Israeli political system, and trace the disintegration of ’s fragile armistice with the Arab states. Readers will be struck by the way the diary reveals Sharett’s acute attention to detail, his perceptiveness, and his literary flair.

The diary also unfolds the dramatic human story of the premature end of the political career of Moshe Sharett – an unusually sensitive, dedicated and talented public servant, exposing his innermost struggles, doubts and frustrations. It tells the story of one politician’s battle against “activist-militant” personalities and tendencies in Israeli society. In its closing pages Sharett (no longer in office) makes a number of painful, prophetic and poignant comments about Israel’s 1956 victory at Suez; he considered himself and his political career as one of the “casualties and losses” of that war, noting upon his return home from an extended tour of Asia: “My country has walked out on me.” Looking back over the decades, Sharett’s diary may also be viewed as an intimate record of the power struggle in which the defeat of the “moderate school” in Israeli foreign policy becomes irreversible.

The long-awaited English edition, covering October 1953 to December 1956, is condensed into three volumes, eliminating non-essential descriptive detail while maintaining the integrity, flavor and impact of the full original Hebrew diary as published in 1978. The English edition provides the following (partly available or soon to be available here):

Selections of the translated diary have appeared previously in the following academic journals: