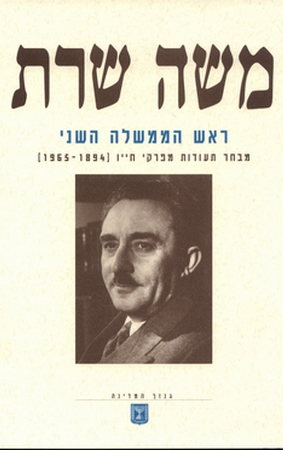 The selection of documents by Moshe Sharett presented in this volume, the sixth in the commemorative series on the presidents and prime ministers of , illustrates the life and times of 's second prime minister.

For those who take an interest in the history of the establishment of and in its formative years, Moshe Sharett (originally Shertok) is far from being an unknown figure. His career is well documented and Sharett himself planned to publish his papers and speeches. Two volumes appeared during his lifetime, one of Hebrew translations of his speeches at the U.N and the other of impressions of a trip to and the . After his death a series of volumes appeared based on papers from the period of his work in the Political Department of the Jewish Agency. In the 1970s Sharett's elder son, Yaakov Sharett, was responsible for the publication of the private diary kept by Sharett between 1953 and 1957, which is an important and fascinating source for the understanding of Sharett's personality and the history of the period. The Society to Commemorate Moshe Sharett, which was founded by Yaakov Sharett and other family members and friends, plans to publish a shortened English version of this diary, and has meanwhile issued a series of volumes in Hebrew of documents from various periods of his life. A biography of Sharett by Professor Gabriel Sheffer has already appeared in English, and many articles discussing his positions on political and public issues have appeared in academic forums.

Nonetheless, Moshe Sharett remains a somewhat shadowy figure, remembered only as 's first foreign minister, who played an important role in the struggle to establish the state but proved the loser in the dispute with his senior colleague David Ben-Gurion in the 1950s. His tenure of the post of prime minister is hardly remembered, and interest has focused on Sharett's moderate positions on security issues at that time and his disagreements with defence minister Pinhas Lavon.

In this volume we have tried to paint a fuller and more complex picture of Moshe Sharett's personality and ideas. We have selected 167 documents and added historical introductions covering all periods of his life, from childhood in Kherson in Russia, through his family's arrival in Palestine in 1906, their stay in the Arab village of Ein Sinya and his schooldays in the Herzliyya Gymnasium in Tel Aviv, to his rise to the first rank of the leadership of the Yishuv, the Jewish settlement in Palestine, and later of the state of Israel. We have attempted to show the development of his political thought and activity from 1919, when he joined "Ahdut Ha'avoda", an early Zionist socialist party, through his work as a journalist on the Histadrut daily "Davar”, to his long career in the Political Department of the Jewish Agency where he represented Mapai, the Zionist Labour party. We have laid particular emphasis on his attitude towards the Arabs, which moved from the suspicion and hostility expressed in his early writings to the clearsighted statement in his letter to Ben-Gurion of 24th September 1921, that there might be no possibility of co-operation with the Arabs for many years and no other way forward for the Zionist movement but that of immigration, fortification and defence of its positions. Thus, Sharett's work in the Political Department, at first as the assistant of Chaim Arlozorov and later, after Arlozorov's assassination in June 1933, as the head of the department, focused on strengthening the Yishuv, in the hope that one day agreement with the Arabs would be possible.

Sharett had to steer a course between the needs of the Yishuv, the policies of the British mandatory government and the hostility of the Palestinian Arabs. During the Second World War Sharett's senior colleagues Chaim Weizmann and David Ben-Gurion were frequently absent from for long periods. At these times Sharett served as the acting head of the Yishuv and his stature as a public figure increased. During the war he worked for the establishment of the Jewish Brigade and tried with little success to advance the cause of rescue of Jews from Nazi-occupied .

From 1945 on Sharett supported the policy of armed struggle against British immigration policy, even though he was seen by many as "the most moderate of the radicals". He was held in the Latrun internment camp for over four months. After Weizmann was deposed as president of the World Zionist Organization in 1946, Sharett became the Zionists' most important international spokesman. The high points of Sharett's activity were the struggle to pass the partition resolution at the UN General Assembly on the setting up of a Jewish state and the defence of the resolution and of the gains of the 1948 war. This activity culminated in the admission of to UN membership in 1949.

On becoming foreign minister in 1948, Sharett, with the help of his director-general, Walter Eytan, laid the foundations for the structure of the ministry, developed its code of practice and coined many diplomatic terms in Hebrew. His influence was not limited to foreign policy, and Sharett also played an important part in internal policy-making, in areas such as determining the powers of the government and the ministers, and the state's treatment of the Arab minority. One of his major achievements was his role in bringing about the agreement with the Federal Republic of Germany on the payment of reparations to the State of Israel for Jewish property stolen by the Nazis. This agreement helped to place the Israeli economy on a solid footing and enabled the state to absorb the mass of Jewish immigrants.

In 1953 's international position came under threat as a result of Cold War manouevres and Arab hostility. The security situation worsened, and Sharett's partnership with the prime minister and defence minister was undermined. In December 1953 Ben-Gurion resigned and Sharett, who was not his choice, was appointed by the party as 's second prime minister, retaining the post of foreign minister. Sharett's period of office as prime minister was not an easy one. He planned internal reform, but had little time for changes under the pressure of the worsening security situation and the lack of faith in him displayed by the defence minister, Pinhas Lavon, and the defence establishment, many of whose leading figures were Ben-Gurion supporters. His attempt to follow a moderate line in defence matters was unsuccessful. In February 1955 Ben-Gurion returned to the Defence nistry under Sharett, and after the elections of July 1955 it was Ben-Gurion who formed the government. Meanwhile, in the autumn of 1955, Sharett visited Europe and the to draw attention to the danger of 's position following the Czech arms deal with . He succeeded in arousing public opinion but the American government was still reluctant to sell arms to . After another seven months as foreign minister under Ben-Gurion, Sharett was forced to leave the government in June 1956, having lost much of his influence as a result of his perceived opposition to a tough defence policy. In actual fact Sharett's position on this subject was complex and he did not always oppose military solutions. We have tried to show his attitudes

in a number of documents dealing with the policy of retaliation for border incursions and the question of a preventive war against .

Sharett never returned to government office, but remained active in public life as a man of letters and a statesman. He worked to advance causes close to his heart, particularly helping new immigrants and improving ties with world Jewry. In 1961 he became chairman of the Jewish Agency, a post which provided an outlet for his talents and his great capacity for hard work. Sharett continued to devote himself to this task, despite his failing health, almost to his last breath. He passed away on 7th July 1965.

Sharett was a much-loved figure in his time because of the warmth of his personality and his deep interest in the lives of others. His close ties with both public figures and ordinary Jews are shown in the many letters received after his resignation and appreciations written after his death. Up to this day people in and abroad who remember him tell stories about his visits to far-flung Jewish communities, his concern for those in need - and also about his insistence on correcting mistakes in Hebrew grammar.

Unlike other leaders of his time who left their families and came to as pioneers, Sharett arrived together with his family and was blessed with a rich family life amidst a "tribe" of siblings, brothers-in-law, children and grandchildren. Unfortunately, the lives of several of his relatives were cut short by early death. In our choice of documents we have tried to reflect this aspect of his life as well.

This volume presents only a small part of the documents and speeches produced by Sharett during his career. From the tens of thousands of documents we selected nearly 5,000, of which 167 were included in the book. The documents come from many sources, in particular the Central Zionist Archives, the Israel State Archives, the Israel Labor Party Archives and the Sharett family archives. In order to arrive at the selection we were forced to limit our search and to concentrate on certain aspects of Sharett's activities; as a result others are covered in part or not at all. We have laid special emphasis on the period of Sharett's tenure as prime minister in the spirit of the Law for Commemoration of Israel's Presidents and Prime nisters (1986).

We hope that this volume will provide a fitting platform for Sharett's views, many of which are still relevant today, and will help to restore Moshe Sharett to his rightful place in the history of Zionism and of .